History of the Area and the Museum

Economic Impact
Many products of the hardwood forest were made throughout a large part of Arkansas and in eastern Oklahoma. Being located near the western edge of the hardwood forest, on the border of Indian Territory and on a navigable waterway, contributed to Fort Smith becoming a large manufacturing center. Almost everything wooden was produced here,  from split rail fences and railroad ties to agricultural implements, steamboats, barrels, brooms, caskets, furniture of every description, truck and automobile body parts, army rifles, and air gliders.

By the early 1900’s a single plant was producing 18,000 wagons a year, including army wagons that were in France during World War I. 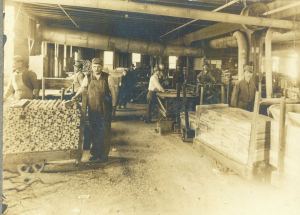 Furniture produced in Fort Smith was exhibited at the World’s Columbian Exposition in Chicago in 1893. This industry continued to grow until, following World War II, the city became the Nation’s largest center of furniture production west of the Mississippi River. It is noteworthy that the early founders of these businesses were instrumental in the creation of the Ozark and Ouachita National Forests in 1907.

There were also more than 1,000 secondary processors of wood in the state. Baseball bats were produced in Harrison, sewing machine cabinets in Truman, and the world’s largest producer of bows and arrows was located in Pine Bluff.

The Hardwood Tree Museum
Encouraged by a group of long-time residents of Fort Smith, including those in city government, the Fort Smith Museum of History, and the history department at the University of Arkansas – Fort Smith (UAFS); the Hardwood Tree Museum was formed as a tax exempt, non-profit public benefit corporation. This governing body was organized in January 2009. And our work continues — entirely with volunteers.

With assistance from the history department at UAFS, we are presently involved in a continuing effort of collecting exhibit artifacts, documents, and interviews.

Using land donated by Fort Chaffee Redevelopment Authority, we plan to accomplish our mission by building in a forest setting near the Janet Huckabee Arkansas River Valley Nature Center in Fort Smith, with whom we have a partnership arrangement that enables us to begin working on activities of mutual interest. This includes identifying and marking existing trees, planting additional species of hardwood trees and other native flora, landscaping, and developing outside exhibits.